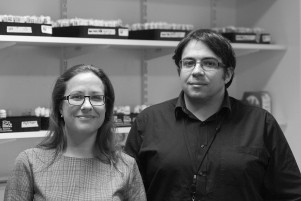 The key question our team wants to answer is how previously healthy neurons start to die? To tackle this question, we investigate the molecular mechanisms involved in neuronal homeostasis as well as how these mechanisms are altered during the onset of neurodegeneration. Neurodegenerative diseases are a major issue for Public Health in Europe and their prevalence will significantly increase worldwide. There is no treatment to cure of effectively reduce the progression for the most common neurodegenerative diseases like Alzheimer (AD) or Parkinson’s (PD). Hence, it is essential to understand the early events acting at the initial state of these diseases, before irreversible neuronal damage occurs.

During neuronal communication, synaptic proteins and membranes need to be recycled to cope with the local demand necessary to sustain neurotransmission. However, the local mechanisms controlling protein recycling and rejuvenation at the synapse are not yet well characterize. We aim to further characterize how the autophagy-lysosomal and the proteasomal degradation pathways act locally in the synapses of healthy flies and in Drosophila neurodegeneration models.

Protein aggregation is observed in many neurodegenerative diseases. We are interested in understanding why cellular process like autophagy fails to clear proteins’ aggregates and also which cellular mechanisms enhance the aggregate spreading. For instance, there are growing evidences supporting that exosome release and biogenesis is a key player in this process. Our lab seeks to further clarify the role of exosomes in neurodegeneration.

Despite protein recycling, synapses require constant supply of new proteins to cope with neuronal communication. To supply dendrites, axons and synapses with new proteins, a controlled system to locally translated proteins does exist. However, which synaptic proteins are being locally translated and which molecular mechanisms control this process at synaptic compartments is still not fully understood. We are interested to understand how local protein translation contributes to synaptic homeostasis.

Ageing is a major risk factor for sporadic neurodegenerative diseases. Interestingly, a mild chronic inflammation appears during ageing, and this process known as “inflammaging” may be relevant during the onset of neurodegenerative diseases. Drosophila is a well-stablished model to study the innate immune response and one of our research axis is to explore the cellular and molecular mechanisms that regulates brain inflammation during ageing and also during the onset of neurodegeneration.

To fulfill these aims, we use the “fruit-fly” Drosophila melanogaster – a successful model to study neurodegeneration as well other human diseases – together with ex vivo models like mouse primary cultures and human induced pluripotent stem cells (iPSC).